Relegation-threatened Everton earned a priceless win against misfiring Manchester United on Saturday as Chelsea hammered Southampton 6-0 on a potentially decisive day in the race for the Premier League top four.

Arsenal slipped to their third defeat in four matches, losing 2-1 against Brighton, while Leeds pulled further away from the drop zone with an emphatic 3-0 win against struggling Watford.

Frank Lampard has struggled to inspire Everton since taking over from the sacked Rafael Benitez in late January, winning just two of his nine league games before United’s visit.

A 3-2 defeat in midweek against Burnley left the club just one point above their relegation rivals and desperately short of confidence.

But goalkeeper Jordan Pickford made two fine saves to deny Marcus Rashford in the early stages in the spring sunshine at Goodison Park.

The decisive moment in the 1-0 win came midway through the first half when young forward Anthony Gordon hit a shot that took a huge deflection off England defender Harry Maguire and wrong-footed David de Gea in the United goal.

The visitors — with top-scorer Cristiano Ronaldo back in the team — huffed and puffed but looked toothless in attack and slipped to an eighth league defeat of the season.

Lampard said he was proud of his battling side, who are trying to maintain Everton’s proud record of being ever-present in the English top flight since 1954.

“Beautiful football can come later on,” he told BT Sport. “I have ambitions for this club to stay up, play well, but in the position we are in, fighting comes first and foremost.”

Interim United manager Ralf Rangnick was glum after his side’s latest reverse — they remain in seventh place, three points behind fourth-placed Tottenham before the late game between Spurs and Aston Villa.

Rangnick, who has a two-year contract to remain as a consultant at United beyond this season, was asked whether speculation over the club’s next manager was creating a state of limbo.

“I don’t think this should be an excuse for anybody,” he said, with Ajax boss Erik ten Hag touted as a strong favourite to be the next permanent boss.

“We’re Manchester United, we’ve got a lot of international players.”

Third-placed Chelsea suffered a shock 4-1 defeat at the hands of Brentford last week before losing 3-1 against Real Madrid in the first leg of their Champions League quarter-final.

But they restored confidence on Saturday by putting Southampton to the sword, racing into a 6-0 lead in the 54th minute, with two goals apiece for Mason Mount and Timo Werner.

“The performance changed, the commitment and the discipline,” Chelsea manager Thomas Tuchel told the BBC.

“This is how we want to play and we gave an answer finally because you could see it on the scoreboard.”

Arsenal are having a wobble at the wrong time after putting themselves in a strong position to qualify to play in the Champions League for the first time since 2016/17.

Brighton took the lead at the Emirates Stadium when Leandro Trossard turned home a low cross from Enock Mwepu while the Zambian midfielder himself added a second. Martin Odegaard scored a late consolation.

“We’ve shown for many weeks how well we can play,” Arsenal manager Mikel Arteta told the BBC.

“It has been a difficult week and we’ve lost some big players, but if you get what you want, not everything is going to be with a blue sky.

“This is our team in the good moments and especially the defeats. There are many games to play but we have to be concerned about that performance, especially first half.”

Raphinha, Rodrigo and Jack Harrison all found the net to give Leeds a third win in four matches and take them nine points clear of the relegation zone.

Manchester City and Liverpool go head to head at the Etihad on Sunday in a top-of-the-table clash that could decide the outcome of the Premier League. 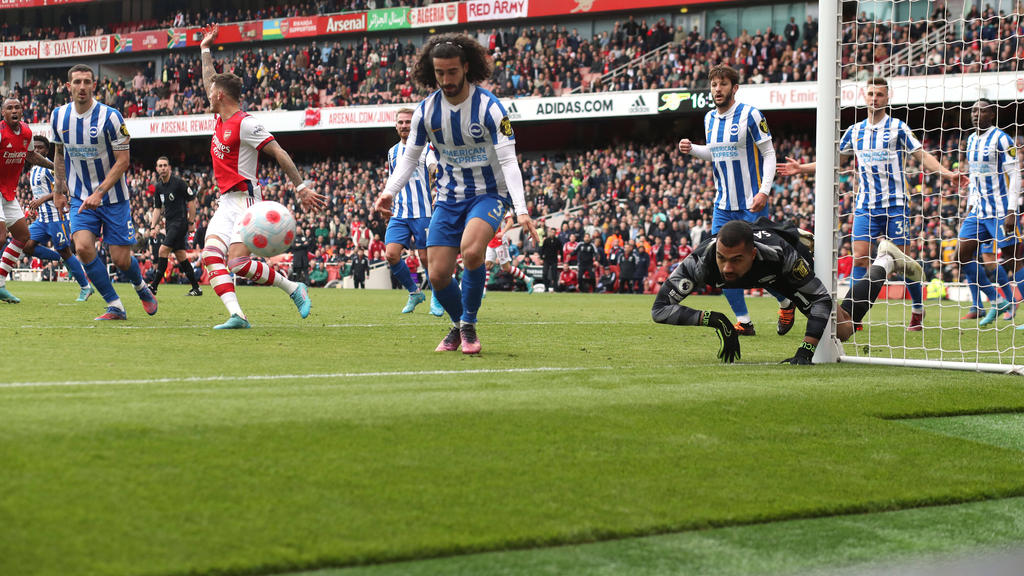